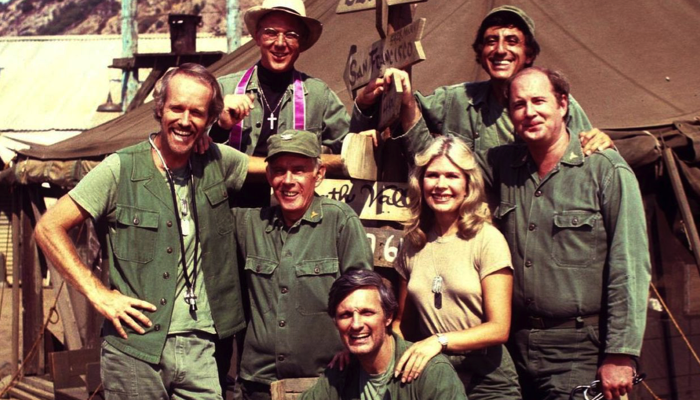 M*A*S*H is a television series aired on CBS between 1972 and 1983. The title of this series is an acronym for Mobile Army Surgical Hospital. Its origins can be traced to a novel titled MASH: A Novel About Three Army Doctors. This book by Richard Hooker came out in the year 1968. It was then made into a 1970 film titled M*A*S*H. The television series was the first original spin-off adaptation of this film.

It follows a team comprising doctors and support staff. They find themselves in Uijeongbu, a city in South Korea during the Korean war of the 1950s. The team is a part of the 4077th Mobile Army Surgical Hospital. The original ensemble cast had Alan Alda playing the role of Benjamin ‘Hawkeye’ Pierce. Wayne Rogers played the role of ‘Trapper’ John McIntyre.

These actors appear in the series as surgeons and were the protagonists. Larry Linville joined the cast as surgeon Frank Burns. Loretta Swit played the role of the head nurse, Margaret ‘Hot Lips’ Houlihan.

The basis of this television show

This series usually comes under the category of ‘situational comedy’. Many also describe it as a ‘dramedy’ or ‘dark comedy’ because of its dramatic subject matter. Most of the episodes of M*A*S*H had a duration of half-an-hour. They aired weekly on CBS. The show revolves around the United States Army personnel who are a part of the Mobile Army Surgical Hospital.

During the Korean War, the 4077th MASH was among Korea’s several surgical units. The asterisks appearing in the title of the television series were entirely creative. They were not a part of the military nomenclature. The early seasons aired when the Vietnam War was still going on.

As a result, the show had to exercise caution while commenting on the war. At the same time it had to be careful not to give out an impression that it was in a protest mode. Of course, it often questioned and mocked the role of the United States in the Cold War. However, the actors did all of this under the cover of comedy.

The first episode of the series aired on the 17th of September 1972 in the United States. ‘Goodbye, Farewell, and Amen’ was the final episode of this television series. It aired as a television film on the 28th of February 1983. It became the highest-rated and most-watched single television episode in the history of United States television at the time. According to the New York Times, it had a record-breaking 125 million viewers.

One would find it hard to believe that it struggled during its first season. There was also a risk of cancellation of this show at one point. When the series entered its second season, CBS placed it in a better time slot. The show soon went on to become one of the top 10 programs that year. For the rest of its run, it was among the top 20 programs.

The broadcast of this series still continues in syndication on many television stations. Many of the stories that featured in the early seasons of the television series were based on real tales. They were narrated by the real surgeons of MASH as a part of their interview with the production team.